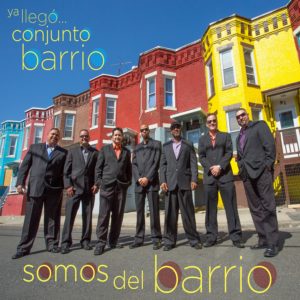 We take you on a tour blending the sounds of Charanga,Guajira,Son,Mambo,Descargas,Plena,Bomba,Bolero,Merengue,Jazz,Cha Cha and straight out Salsa.Honoring not only classics of our masters but also playing our owne original material as well.Conjunto Barrio is now on the works of our first album hopfully soon to be realese with EGJ Records.

has perfomed in some of the very best salsa and latin jazz festivals and has also been awarded with 3 mentions on the 2014 Latin Grammy Awards for there album “Ya Llego Conjunto Barrio”, “Somos Del Barrio”. Conjunto Barrio’s music it’s been also playing all over the world being placed in the top ten best latin songs charts on the different playlist around the world. Conjunto Barrio has also back up some of the best soloist Latin Jazz artists like Alfredo De La Fe, Little Johnny Rivero, Eguie Castrillo, Richie Bastar, Endel Dueno, Edgar Nevarez, Chiemi Nakai among others greats.